In this week’s blog, I will share a personal story about Seventh Sojourn’s fast-acting, extremely effective SuperMint migraine/headache relief gel. 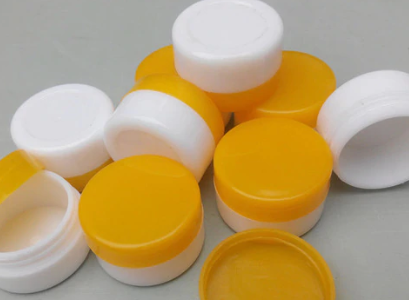 The old-school miracle headache stuff’s container looked similar to this.

My Father was an over-the-road truck driver. It wasn’t unusual for him to bring my brother Kevin and I gifts when he came home from a run. Most of the gifts came from places he delivered to, but one weekend he brought home something that wasn’t even a gift, and this would set off the longest-waged war of our childhood.

On a Saturday afternoon Kevin was complaining of headaches. My Father went to the medicine cabinet and pulled out a small round container that was white on the bottom with a yellow lid, very much resembling a certain lip balm container but with no logo, text, or branding.

He said to my brother, “I got this from a truck stop a few weeks back. Rub some of it on your temples. Don’t use it all, a little will go a long way!”

About ten minutes later, Kevin asked me if I wanted to play some football outside. I asked him, “What about your headache?”

Maybe a week or two later, I suffered my own head-exploding headache. My Mother grabbed the same container and rubbed the gel-like substance on my forehead. As it did for my brother, this mystery gel eradicated my headache swiftly and allowed me to resume being a wild kid for the day.

It was official – our household had ditched Aspirin and Ibuprofen for a topical gel. Although we had no idea what ingredients this gel consisted of, we were armed to successfully combat headaches and that’s all that mattered.

This small container lasted nearly 1 year (none of us were regular headache sufferers) with 4 people using it. The contents of the container were so coveted that my Brother and I took turns hiding it in our respective bedrooms, selfishly trying to hoard it to ourselves.

One fateful day I had a migraine on the school bus. When I went home the container of what we had dubbed “The Miracle Headache Stuff” was gone. We asked our Father to get more, but he couldn’t remember which truck stop carried it. It was obviously homemade, so it had to be in a truck stop with some sort of gift shop. After many unsuccessful attempts to locate it Dad announced, “I can’t find it anywhere” and my heart was broken! I later found out that my Brother used the last of it, which incited a brotherly feud that lasted more than a year. Ok…so it wasn’t exactly a “war” like I claimed earlier, but I never forgot that he used the last of “The Miracle Headache Stuff.”

Reclaiming What Was Mine!

Approximately 21 years ago I met Melissa and Bryan Penney and we became friends. Shortly after, they opened Seventh Sojourn Soaps. Their soap was handmade, all natural, and smelled great. And the best part – it literally erased my acne! If there was ever a way of earning customer trust, providing results would have to be at the top of that list.

I’ve stayed in touch with Melissa and Bryan over the years, never going too long without paying them a personal visit to get more soap! Their product list has gown and includes lotions, body balm, sugar scrub, all-natural deodorant, and many more wonderful all-natural bath and skincare delights. So, when they called me a few years ago and said they had a new invention I had to try, I was curious and quick to comply with a visit.

When I arrived, I immediately noticed a pleasant, “minty” smell permeating throughout their home. In fact, it kind of reminded me of “The Miracle Headache Stuff.” But when Bryan handed me one of the tubes and asked, “Do you get headaches?” I knew two things 1) He and Melissa had just reinvented “The Miracle Headache Stuff” and 2) They were most likely successful, illustrated by a wry smile on Bryan’s face.

I took a tube home and as weird as this sounds, looked somewhat forward to my next headache. After all, it would be the only way to know for certain if I had once again stumbled upon the concoction that was successful against my headaches, 100% of the time – to see if I had truly “reclaimed what was mine!”

Why SuperMint Is Better Than “The Miracle Headache Cream”

SuperMint seems to work the same as the truck-stop container my Father brought home. The essential oils penetrated and work to relax the stressed muscles and inflamed areas that are producing the headache. Meanwhile, the minty aroma soothes and relaxes you so you can let the product sink in and do its work. But there are numerous reasons why SuperMint is better, and here they are:

1)      The Container: The tall, cylinder-shaped bottle contains nearly 4 ounces of the wonderful, headache-soothing gel. Much more than the little container my Father brought home. If the little jar from my childhood lasted nearly 1 year, how long can you imagine a bottle of SuperMint lasts!?

2)      The Ingredients: Unlike the stuff from my childhood, SuperMint’s ingredients are on the website and packaging. This proves useful to those who care what they put on their body, and you can count me as one of those people. You can pronounce these ingredients and they are NATURAL.

3)      A Cease Fire: SuperMint is easy to find on Seventh Sojourn’s website, soapmagic.com. I no longer fight with Kevin over “The Miracle Headache Stuff” because we each have our own bottle.

4)      The People: Unlike the origins of the truck stop headache gel, I know where SuperMint comes from. I know that it’s handmade and the folks who make it take great pride in what they do. I’m also fond of supporting small businesses that make great stuff, and that is Seventh Sojourn and SuperMint.

5)      No Pills! We were never able to relocate the stuff from my childhood, but SuperMint is an assurance that I will never have to go back to Ibuprofen or Aspirin again! Anytime I can avoid putting pills in my body, I’m a happy camper. I will gladly turn down side effects such as stomach bleeding and blood thinning.

If you suffer from migraines and headaches you owe it to yourself to try SuperMint. Headaches should not ruin your whole day and you don’t have to let them do so. Just read the reviews of this product on Seventh Sojourn’s facebook page! There isn’t a single person underwhelmed by SuperMint’s benefits. In fact, the more reviews you read the more you see folks with far-more-intense headache problems than I who testify to SuperMint’s quick-acting, headache erasing benefits!